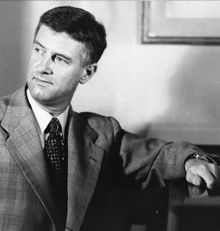 Ray Green was born in 1908 in Cavendish, Missouri. He was raised in San Francisco and studied under Ernest Bloch, Albert Elkus and Giulio Silva. In the mid 30’s, he won the George Ladd Prix de Paris, a 2 year composition fellowship from the University of California, Berkeley, to study modern music abroad. While abroad, he studied composition under Darius Milhaud and gained conducting experience with Pierre Monteux. Instead of remaining in Paris as originally intended, he explored the continent but was disappointed with the state of music composition and returned to the U.S. to discover his own way.

When he returned to the United States in 1937, he met May O’Donnell and wrote the score for her first work, “Of Pioneer Women”. This was the beginning of his career as a composer in the dance field. In 1938 at the Bennington School of Dance he wrote “American Document” for Martha Graham. 1938 also marked the year he married May O’Donnell and began their long and successful collaboration of music and dance.

During the years prior to and during WWII he was composer-conductor, first with the Federal Music Project in northern California and then as a member of the Armed Forces. During this time, one of his main interests was in getting music accepted as an essential component to medical treatment in the Veterans Administration hospitals. He was Chief of Music for the Veterans Administration, and in 1948 was invited to become Executive Secretary of the American Music Center in NYC, a position he held for over twelve years.

In 1951 he founded his own publishing company, the American Music Edition (AME), which played an important role in documenting and disseminating new American music by Green, Carl Ruggles, Halsey Stevens, and many other composers. Green’s archives (housed at the New York Public Library for the Performing Arts) consists of manuscripts, business papers, and correspondence reflecting AME’s repertoire as well as the interactions Green had with many key figures in twentieth-century music, including John Cage, Henry Cowell, Charles Ives, Gunther Schuller, William Grant Still, and Virgil Thomson.

In 1987 he set up the Ray Green Award which was the first piano prize where the teacher and the student share equally in the prize.

Ray Green’s influence was felt in the worlds of American music composition, music therapy, modern dance, and music publishing. He tried to create a new American music consisting of a harmonic system removed from the European tradition. This was signified by elements of American jazz, American folk music, Asian music, microtonality, music for dance and electronic music. It was never to be highbrow or too cerebral but accessible to all audiences.

Ray and May lived and worked together for over 50 years and became one of the most formidable combinations of composer and choreographer of their time, producing over forty collaborative works.